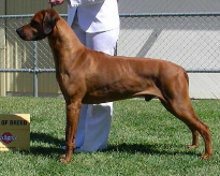 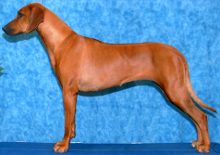 We chose the handsome and upstanding Kimba as the sire for Kierra's third and final litter. Having chosen Kimba, getting to him was the next difficult as he and his family had relocated to Hobart, Tasmania. Unperturbed, we set of from Adelaide with Kierra and her daughter Saran as company for the 10 hour drive to Melbourne. Once there we caught the Spirit of Tasmania ferry and made the 12 hour crossing of Bass Straight from Melbourne to Devonport, from there a further 5 hours of driving saw us arriving in Hobart! Unfortunately or perhaps fortunately for us, Kierra chose this time to stall her season, so we spent 5 days touring the island, walking the deserted and windswept beaches and the summit of Knocklofty whilst we waited for her to be ready to mate. Our efforts were rewarded when she produced us another litter of beautiful puppies. One of the girls, Tempa has remained with us at Kushika and like her parents has done very well for herself in the show ring.

Litter 8 has produced the following Champions